Research in geospatial 3D printing was started at the Department of Geoinformatics at Palacký University in Olomouc in 2014 by testing the possibilities of using and limiting this technology to visualise geospatial data. The result was knowledge about the usability of real 3D models and procedures that enabled easier processing of GIS data into 3D. This created plastic models and colour paper models depicting the relief of the landscape or building models. At the same time, research into 3D printing of haptic maps (tactile maps for the blind) and streamlining their creation was also carried out. It is followed by developing interactive haptic maps connectable to mobile devices, which brings new multimedia functionality of maps and current information to map users. In 2018, the 3D geospatial laboratory Olomouc (3DGLORY) was established to deepen the acquired knowledge further, develop new technologies, and further integrate tactile and visual environments.

At present, touch screens are already a common part of the user interface of various products. The limited configuration and the need to adapt the controls to different program environments have resulted in a completely flat touch area under which virtual graphic elements are displayed. The present technical solution provides a system for transmitting a signal from a 3D touch screen to a detector registering electrical impulses, such as a tablet, a laptop, a mobile phone with a capacitive display, or a similar device with a similar device processor. This device further comprises a software application that performs a predetermined action which is performed when touched due to the signal on the detector. It can be the start of a process, audio, visual, tactile (vibration) or similar response. The action may be performed by a device comprising a detector, or the action may be performed by another device connected conductively or wirelessly to the detector. This unique combination brings completely new possibilities for developing controls, user interfaces and other applications where it is appropriate or suitable to use the third dimension. The resulting models can be individually adapted to achieve optimal results.

The Department of Geoinformatics has long been dedicated to tactile cartography and modern trends in creating tactile maps. The TouchIt3D technology developed by us is based on the connection of 3D objects, such as typefaces, 3D diagrams, controls, etc., with a mobile device such as a tablet or mobile phone. Each model is connected to a mobile application, which triggers a predefined action based on user suggestions. Action can be vibration or an acoustic signal with the name of the object when the blind person comes into contact with the relevant map symbol or a list of recent departures of public transport lines on the device display after the user touches the stop model on the 3D plan of the transport terminal. TouchIt3D technology mainly focuses on the presentation of spatial data and navigation for the public and visually impaired people.

more can be found here. 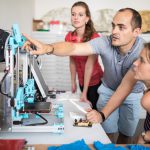 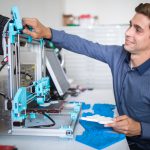 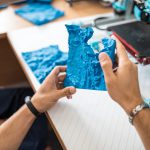 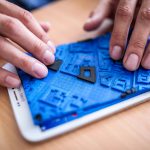 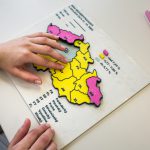 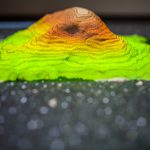